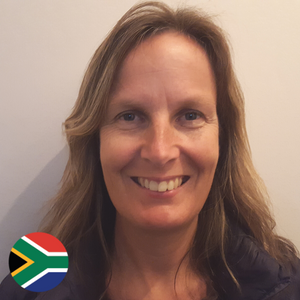 Karin Clarke is the Chairperson of the Prader-Willi Syndrome Support Group of South Africa.  She graduated with a Bachelor’s degree in economics and psychology from the University of Cape Town (UCT).  She worked in Marketing Research, at Kantar TNS until her daughter with PWS was 2 years old.

In 2011 when her daughter was four years old and was finally diagnosed with PWS she joined the PWS Association of South Africa. In 2015 she started the Facebook page for PWS SA and became more involved. In 2017 she became the Chairperson and the structure was changed to a support group under Rare Diseases SA (RDSA).   She works with RDSA as a rare ambassador for PWS.  The three main areas of focus for the support group are support, education and advocacy.   The core form of support is the WhatsApp group due to the large geographical distances in South Africa.  Due to the very low levels of diagnosis of PWS elsewhere in Africa families from other southern and central African countries are welcomed to join PWS SA as there are no support groups for PWS in southern and central Africa.   Connections are being made through Rare-Africa (also predominantly run by RDSA) to educate on PWS elsewhere in Africa.

Karin has been a co-opted Trustee of IPWSO since 2022.