Vanja Holm’s contribution to our knowledge of PWS 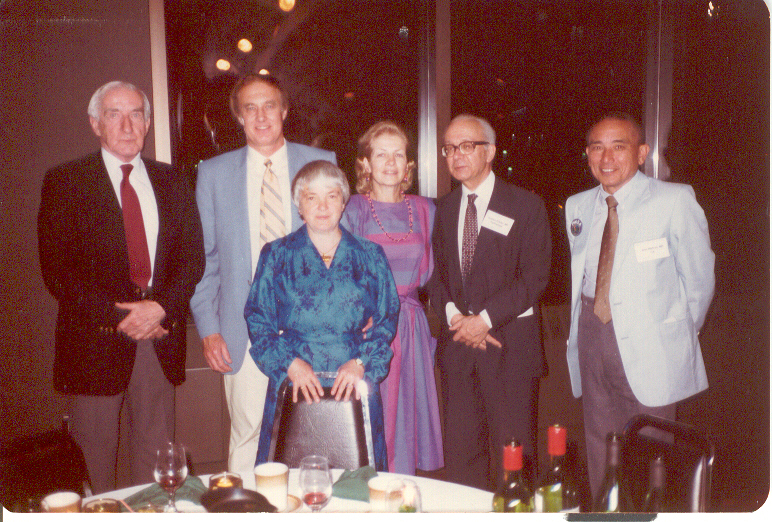 Photo above (left to right): Hans Zellweger, a child neurologist from Iowa who worked in the field and was the thesis supervisor for the PWS research of Louise Greenswag, Gene and Fausta Deterling,  from Minnesota, early organizers of what became PWSA (USA), Andrea Prader and Sam Beltran, an early President of PWSA (USA). Front (in blue dress): Vanja Holm. Photo taken in July 1984.

Dr. Suzanne Cassidy, past President of IPWSO, outlines the impact of Dr. Vanja Holm’s work in the field of PWS…

On November 16, 2020 Prader-Willi syndrome lost Dr. Vanja Holm, one of its most important and caring specialist physicians, one who devoted much of her career to medical care, research and education about people with PWS.

As a pediatrician who specialized in developmental disorders (conditions that included slower development and intellectual disability) at the University of Washington’s specialized center for developmental disability, Dr. Holm established and directed one of the very first clinical programs dedicated to children (and later also adults) with Prader-Willi syndrome. This was a multi-disciplinary clinic that included many specialties relevant to people with PWS, and it served as a model for similar clinics in other medical centers and universities. She also organized one of the first medical conferences dedicated to PWS, which included multiple speakers from many institutions each of whom contributed a chapter about a particular aspect of PWS that Dr. Holm collected into the first book about PWS, published in 1981.

I first encountered Dr. Holm when I was in fellowship training to become a clinical geneticist. During my second year, in 1980, a geneticist from Baylor University in Texas, Dr. Vincent Riccardi, gave a talk at University of Washington about his graduate student, Dr. David Ledbetter, finding a very small deletion in about half of the people he analyzed with clinically diagnosed PWS using the then new technique of high resolution chromosome analysis. This was the first time that anyone had found a frequent chromosome change in PWS. With Dr. Holm’s approval, I did my fellowship research project arranging for testing of the patients in her clinic using the new technique. Thus Dr. Holm made possible my career-long interest in PWS and helped in unraveling its cause.

Dr. Holm was very involved with the Prader-Willi Syndrome Association in the USA and was the head of its Scientific Advisory Board early on. Through her, the members of this board held a conference to develop agreed upon (consensus) diagnostic criteria. Dr. Holm was the lead author when the criteria were published in an important medical journal in1993, and they are still used today to raise suspicion of the diagnosis of PWS.

But even before that publication, in 1991, the first international conference on PWS was organized with a grant from NATO. The conference had a strong medical/scientific component as well as a component for families. It took place in Holland  hosted by the Netherlands PWS association. Dr. Holm was one of the keynote speakers, presenting the consensus criteria. While at that international gathering, Dr. Holm was part of a meeting of country representatives at which a decision was made to establish an organization of countries to support Prader-Willi syndrome, and it was there that the International Prader-Willi Syndrome Organisation (IPWSO) was born!

As is evident, Vanja Holm holds a very special place in the history of our knowledge about PWS and the organizations that provide support and information about PWS for families and care providers of people with PWS. She will be greatly missed and always thought of with gratitude and admiration.

Below is a tribute written by Vanja’s daughter, Ingrid A. Holm, who is a medical geneticist, and is reproduced with her permission:

A tribute to Vanja A. Holm

My mom. She died on November 16, 2020 at 92 years of age, peacefully, after battling dementia for a number of years.

Vanja A. Holm was a remarkable woman. She was born on October 5, 1928 in Kiruna, Sweden, 90 miles north of the Artic Circle (where the winter light came from the aurora borealis). She was an only child and her father was the town barber. When she told her father that she wanted to be a nurse, he said “You’re a good student. You should be a doctor.” And she did just that, going to medical school at Karolinska Institute in Stockholm. She met my dad, who was visiting Stockholm from Seattle, got married in Kiruna (in June where it snowed the day before) and move to Seattle in the 1950’s.

Vanja did her internship and residency in pediatrics at the University of Washington at a time when there were only a handful of women in medical training (2 were from Sweden). She went on to a fellowship in Developmental Pediatrics at the University of Washington and then became a faculty member. At a time when women were primarily at home (not one of my friends had a mom who worked outside of the home), she juggled a successful career with raising 2 children, with the help of her parents who moved from Kiruna to Seattle. Despite her male colleagues telling her that because she was a woman her career wasn’t that important (didn’t put her as an author on papers), she just forged ahead, unfazed. A colleague of hers described her as a 5 foot giant (though she was actually only 4’11”). She wrote some of the first articles on the clinical features of Rett Syndrome and the dietary management of Prader-Willi syndrome (search “Holm VA” in PubMed). A highlight (at least for me) was a feature article in Time Magazine in the 1970’s about Prader-Willi syndrome with a photo of her. She also was the Medical Director of the Boyer Children’s Clinic in Seattle, a clinic for children with developmental disabilities, for 20 years, where she was beloved. I recently found out that she donated a portion of her salary every year to an educational fund for the clinic staff.

As a tribute to what Vanja meant to the people she worked with, her wall has plaques of “appreciation” from the University of Washington Medical Center, the CHDD (Center on Human Development and Disability), the International Rett Syndrome Association, and the Prader-Willi Syndrome Association. On October 10, 2005 the City of Seattle had a “Recognition Day” for Vanja and the then mayor, Greg Nickels, recognized her with a plaque from the City of Seattle encouraging “all citizens to join me in thanking this extraordinary individual for her dedication to our children and to our city.” Yes, she was a remarkable woman. She made such a difference in so many people’s lives, not just ours.

Over the past 10 years she has battled dementia. Despite that she just kept going, with her positive attitude and non-nonsense view of the world. Erik, my brother, has taken amazing care of her during this time, and she (and I) have been so fortunate to have his loving care of her for so many years.

Erik and I could not have had a better mom. We count our lucky stars every day. She taught us to be caring, honest, thoughtful, work hard, and to follow our hearts. I can’t thank her enough for everything she has done for me and for us. We will miss you, mom! 💗💗💗💗💗