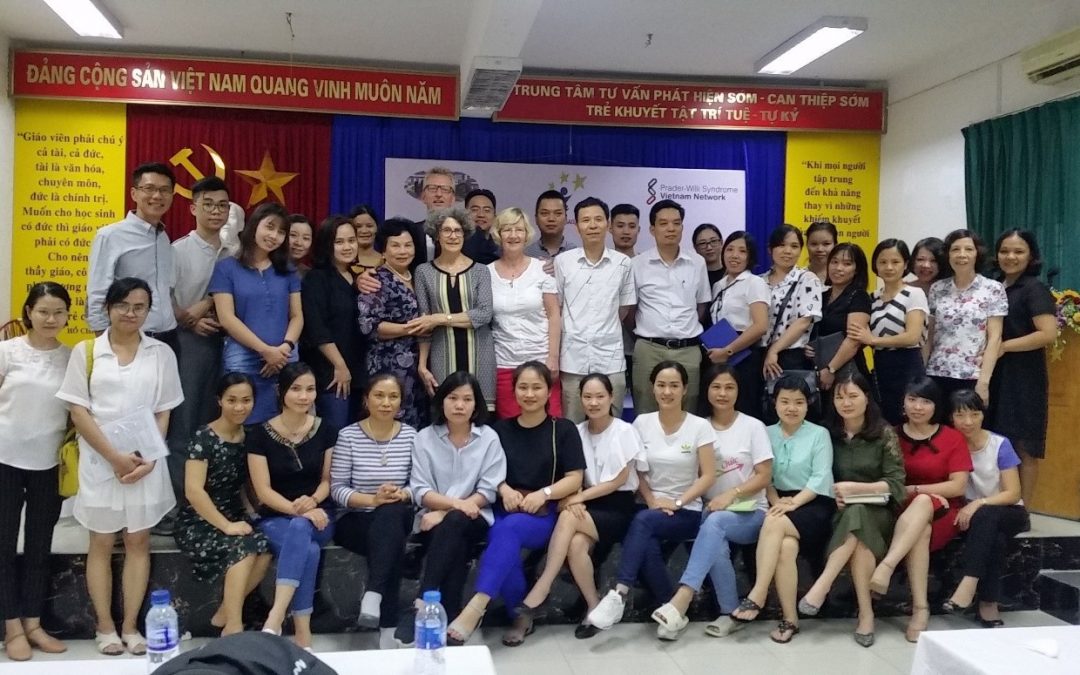 Georgina Loughnan (IPWSO Board member) Constanze Laemmer (paediatrician and nutritionist), Norbert Hodebeck-Stuntebeck (from the Professional Provider Caregiver Board) visited Hanoi, Vietnam, to present a one-day Prader-Willi Syndrome programme on both Saturday 12th and Sunday 13th October, 2019, at the request of Do Thuy Lan, the psychiatrist who established the Morning Star Centre for children with disabilities and who won a scholarship to attend the PPCB Conference in Munich last year.

The Centre is located in the Thanh Xuan District of Hanoi city and occupies a multi-storey building of many small classrooms, several sensory stimulation rooms, a hydrotherapy pool and spa, a full kitchen and food preparation area, and an outdoor play equipment area. Morning Star employs 67 staff, made up of psychologists, physiotherapists, occupational therapist, speech therapists and educators. They currently have 170 children attend and one with PWS. Last year they had 200 attendees. Lan’s vision is that more families will enrol their children in either Morning Star or a similar facility to improve the children’s functional capacity and longevity. During the Sunday programme more and more parents asked for this option. As a result of this meeting the prospect of the Morning Star Centre becoming a centre for people with PWS in the area of Hanoi, becomes more probable.

A wonderful Opening Ceremony was presented by children of the Morning Star Centre on Saturday morning. This included both young and older children with disabilities, who expertly performed dance routines they had practised daily for the previous month. What a delight to watch!

Saturday was attended by about 80 professionals, including a paediatric endocrinologist and a geneticist, and many of the Morning Sun staff. Sunday was attended by about 36 parents and 30 Morning Star staff members. We met with Dang Trung Tam, the president of the PWS Vietnam Network or “club” and many keen parents. Lantz Yap, from the Malaysian PWS Association joined the Sunday programme. The Vietnamese PWS Network includes 60 families. All children known are under 16 years of age. The content of the two days focused on physical, social, cognitive and emotional characteristics of PWS. This was the basis for the more individual and specific questions and answers from professionals and parents. Afterwards the participants felt very well informed and expressed a feeling of better perspective for the future care of their children and the professionals who worked with them.

The situation in Vietnam for people with PWS is rather grim. Children may attend a facility, such as the Morning Star if their parents can afford the costs, but otherwise stay at home. There are no “special needs” schools in Vietnam. Lan reported that The Morning Star costs are much lower than most centres in Vietnam, and she adjusts the fees for those who are very poor. She receives no government funding, but her son-in-law has encouraged a group of his friends to sponsor some of children to attend.

The children receive the therapies they require and life-skills training, such as dressing themselves, household practices like making beds and cooking. The training rooms are small and closed in, but the children receive a high ratio of staff support, or one-on-one for sensory and speech therapy.

Growth Hormone is available in Vietnam but at a cost for the families.

In Hanoi, many people eat in groups on the streets as city housing usually consists of a 6m x 6m flat. The PWS eating behaviour was one of the greater problems for the families who attended the programme. They reported that their children were obese. From what Lantz reported, the situation in Malaysia is similar regarding facilities and obesity in the children. He is very keen to bring IPWSO to Malaysia for the IPWSO Conference or even a regional one, if Malaysia does not win the bid for the 2022 IPWSO Conference. The families were young and very keen to improve their children’s health and lifestyle outcomes.

Overall, the programme went very well and was certainly much appreciated by those who attended, especially the families of the children with PWS and staff of the Morning Star Centre.

On Monday, Lan graciously took us to the magnificent Ha Long Bay in the North East of Vietnam. It is known for its emerald waters and thousands of towering limestone islands covered in rainforests. Legend has it depicting the shape of a dragon!